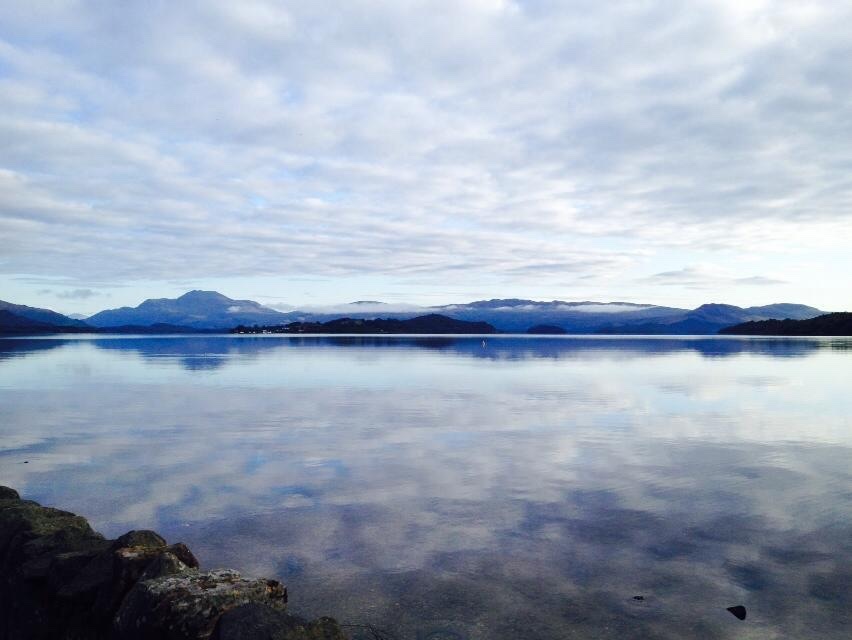 I had a thirst, not only for a drink (I’d been off the booze for a year) but for knowledge. Whilst I was researching everything I could find related to swimming Loch Lomond, I stumbled across a blog that would change my life forever!

There was this guy, Mark Sheridan who swam the Loch in 2012, having read his story I knew that I needed to track him down, buy him lunch and as my American friends would say ‘drink from the fire hose’.

You should check out his blog here:

Eventually after much online searching, I managed to track down Mark’s email address. Luckily it turned out that he worked in London not ten minutes from my own office and I dropped him an unsolicited email with an offer of lunch, and hoping that he would agree to meet and share his wisdom. I was excited when Mark agreed and felt that finally I was making some real progress.

We met for lunch in Wagamama’s a week later, it was a bit like a first date. Mark trying to get a feel for whether I was really up for the challenge, or just another wannabe Loch Lomond swimmer. He was probing for the tell-tale signs and searching for common ground. I remember, when mentioning to Mark that the swimming and the distance would not be a problem for me, the wry smile that lingered from across the table.

Mark gave me some solid advice about choosing my crew wisely, and sorting out a boat early. We discussed the best route and the challenges of navigating at night, all invaluable for planning my swim the following August. Mark also mentioned that he often trained with some Nutters at Holborough lake in Kent. I told him that I would check it out as it was only about 30 mins from my home, and much closer than a drip to Dover. I paid the bill and we parted company.

Over the next couple of months in the lead up to Christmas 2013 I started putting plans in place to recruit a crew, book a boat, and propose (sell) a great holiday in Loch Lomond to the family, which would by chance, coincide with the swim.

As with the previous year Christmas was the time for planning but it became quickly apparent that this coming year, things needed to change.

My family suffered in 2013, I was single-minded, selfish and didn’t include them in my plans. I had tunnel vision and did not realise the extent to which my training and state of mind was impacting my family. My wife and I had a long and emotional discussion, the outcome of which was that I promised to find balance, to make time during the year for them and to include them in my plans. It dawned on me that they were really invested in my endeavour emotionally and wanted to contribute and feel part of what was to come. It was no longer my swim but our swim, and I realised I could not do it on my own.

This reset manifested itself in a written plan of activities for the next eight months to include not only all training swims, key milestones, events and associated travel but also dedicated family time, short breaks and holidays.

My simple aim was to swim further and faster every month than the previous year. I planned to swim in the pool until April then the lake at Holborough or the sea either in Dover or Devon. I also planned to swim my first BLDSA swim in 2014, the notorious Champion of Champions, and decided that a successful ten-hour sea swim off Budleigh beach prior to Loch Lomond would give me the necessary confidence going into the swim.

I stuck a daily planner on the wall of our study and used various colour coded dots to indicate progress.  I was ready to execute our plan to the letter..