I decided that following my swim of Loch Lomond it would be beneficial for me to try and continue swimming outdoors throughout the winter. I was hopeful that by doing so I would be better able to deal with the cold in the early part of 2015 and get some real distance in at the beginning of the season in preparation for my Channel attempt in August.

I have to admit that winter swimming was great fun in the months of October, November and the early part of December. The Nutters were amazing; they are an experienced winter swimming bunch and they taught me everything I needed to know about being safe in the cold water – knowing the warning signs and instilling in everyone that it’s not about what anyone else is doing, but purely down to you – how you are feeling and knowing when you have had enough. Everyone looked out for each other and there was always cake and a cuppa afterwards to help ease the shakes!

There are no egos in winter swimming, just a bunch of folks who love each others’ company . There is an invigorating feeling and a sense of really being alive when you swim in such unfathomable temperatures, wearing nothing but your trunks, hat and goggles. You also need a flashing light attached to your goggles for night swimming but luckily my green guardian light still had plenty of life left in it!

Warm clothes for afterwards are a must and I would highly recommend the obligatory Dryrobe as well.

The Nutters were all regulars at the lake and Mark and I were swimming on Wednesday nights and every weekend (on a Saturday and sometimes Sunday as well). It was strangely addictive and as an added bonus fireworks night coincided with one of our Wednesday night swims. Witnessing rockets and various eruptions from the cold dark waters was something special and this has now become an annual tradition.

I soon learnt that as long as you are in pain when swimming, then you are probably doing fine. If you start to feel euphoric and the idea of sinking away happily to a watery grave seems like a nice idea, then you’re probably hyperthermic but not really aware that you are actually in immediate danger.

This is the very reason why swimming with such a great group is really important. The Nutters are always chatting, helping and generally keeping a close eye on everyone. Pam, Margot, Jackie and the other ladies of the lake will always be on hand to help you out of the water, dry you off and help you get dressed! 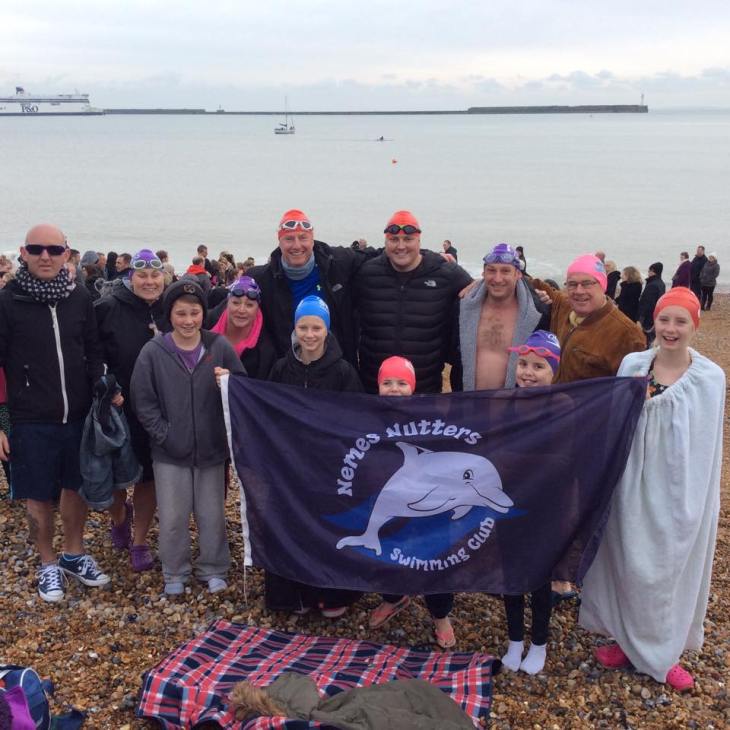 The temperature started to plummet fast after Christmas. I was persuaded to join the Nutters at the UK Cold Water Championships and PHISH in early 2015 and that motivated me to keep pushing on as the temperatures continued to drop.

At PHISH I entered the endurance challenge and a relay. On the day it was actually a bit warmer than when I swam over a mile a few weeks earlier in the lake. The description of the event as per the PHISH website was as follows and I was quietly confident.

The endurance challenge is for experienced cold water swimmers only. The challenge will be 10 lengths of the lido (610m) plus one length for each degree centigrade above freezing up to a maximum of 1,220m.

The only pre-requisite is that you need to have swum 1,000m at 6C or less, preferably recently.

At the end of my endurance race.

PHISH was really atmospheric and loads of Nutters were in attendance. It was a great day out and every swimmer was clapped and cheered at every turn.

Many of the Nutters carried on swimming at the lake as the temperature kept dropping and by the beginning of February the lake temperature had fallen to about 3.6 degrees! 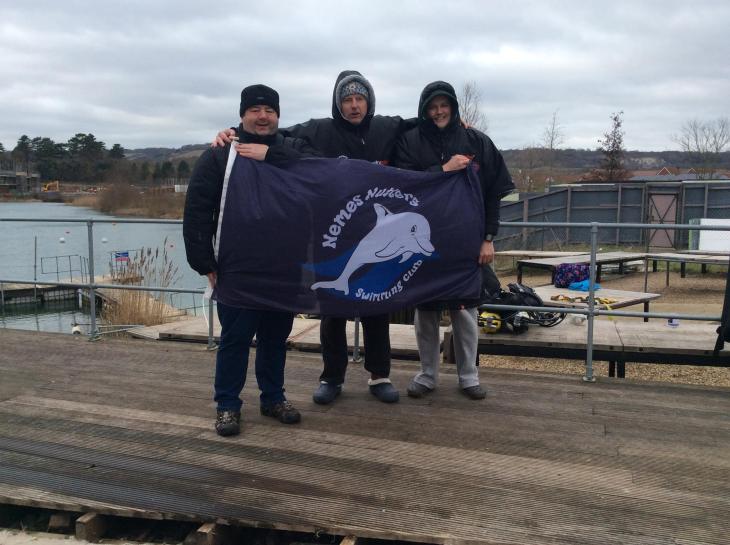 Every swim at this temperature is followed a race to get dry and dressed (including a woolly hat) before the shivering begins. You know it’s coming and when it does it never feels great but you know it’s your body’s way of getting warm and a cup of tea and a cake always helps the process pass more quickly.

If you don’t shiver at all you’re usually in trouble and if your core gets too cold you will suffer a nasty after drop!

Normal shivering is fine but a more serious after drop can occur when a swimmer is nearing hyperthermia. When the blood vessels in the extremities narrow down, blood flow is directed to the more important organs of your body such as the heart, kidneys, etc. , and once you exit the water, the cold blood from your extremities travels back to the core mixing with the warmer blood and lowering the core temperature still further.

I have never had a serious after drop but I have witnessed a number of my friends go through it and it is never a pleasant experience for anyone.

I had my last winter swim in Dover in the middle of February and that marked the end of my first year of winter swimming. What a buzz!

I now had to focus on my Channel swim in August, and to be honest I’d already started thinking about my next swim after the Channel!

Having reviewed the video footage of my Loch Lomond swim it was very evident that I needed to revisit a number of things related to my stroke and technique, that I had no idea about prior to the swim, if I was going to be successful on my future endeavours.

Paula and Dave run the Nemes Diving and Watersports Acadamy at Holborough Lake in Kent. I had spoken to Paula at the lake to book my induction on Sunday before heading home from Devon.

I woke up early, keen to head over for 11am when my assessment was booked. The whole family was coming for moral support and I’d heard that there might be some Easter treats at the lake as well!

We arrived at about 10.30am and the facilities looked great, proper changing rooms rather than the empty shipping container I’d seen at another lake I had visited earlier in the year. This lake was primarily a divers lake but it looked perfect for swimming with a well-marked circuit.

Debbie (my wife) and the girls immediately decided to take part in the Easter treasure hunt and various other activities that had been laid on. I paid my £15 and proceeded to change into my trunks. Dave was dragging his small rowing boat towards the small slipway that allowed for an easy entry to the lake. He was to escort me up to the yellow buoy and back (the pre-requisite distance for the swim assessment).

The whole circuit is about 400m and I was planning to do at least a lap, just to get my monies worth. Dave was sitting in his inflatable dingy, oars in hand, waiting for me to lower myself into the water. I think I might have sworn on entry as it felt much cooler than the sea in Budleigh.

I later read somewhere that the sea, when compared with fresh water at the same temperature, feels warmer. I would agree with that based on my experiences that day and since.

I slowly stepped off the slipway and into the waist deep water by the wall. I lowered my goggles over my eyes and splashed myself a little in order to acclimatise and then I just decided to go!

Head down I swam as fast as I could (I may even have kicked a little) all the way up the side of the lake to the furthest yellow buoy, Dave keeping pace as best he could in his dingy. I stopped at the end and Dave had a puzzled look on his face declaring that I only needed to go as far as the smaller buoy that bisected the two larger yellow turning buoys. I didn’t really understand what he was on about as I didn’t remember seeing the other buoy on my way past. I asked if he was happy for me to finish the lap, he smiled and left me to get on with it as he rowed back to the slipway.

At the end of the lap there was no sign of my supporters so I decided to swim another lap before getting out. I beached myself on the small slipway, clambered to my feet and made my way up the path to the changing room, I was offered a free cuppa en-route which was nice and as I got dressed Paula kindly wrote up my membership card. 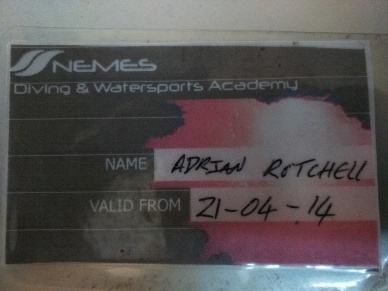 I hadn’t paid much attention to the noisy group of people eating cake as I exited the water but it turned out that they were all Nemes Nutters, a friendly bunch of scuba divers, swimmers, kayakers and long-suffering partners of the above. By completing my swim assessment it would appear that I was now a Nutter too!

I soon realised however that it was not quite as simple as that. The Open Water Swimming faction of the Nemes Nutters had their own special initiation practices.

It was absolutely necessary for me to engage in a lot of chatting, hugging, kissing, helping each other get dry and in some cases dressed, eat vast quantities of cake, drink tea and of course partake in a healthy amount of swimming!

In reality being one of only a few male Nutters, I was readily accepted into the group and I couldn’t have imagined the friendships that would develop over the coming months and years. Without exception all of the Nemes Nutters are lovely people and I’m proud to call them my swimming family.

Little did I know at the time, but the Nemes Nutters Swimming Club is legendary in Open Water swimming circles and as at 14th July 2014 the roll of honours looked like this!

I was in awe when I realised the scale of the achievements from within this group of people and I wanted to learn from their experiences and add to the list of accolades.

The truth of the matter however, was that before I was able to do anything worthy of this list, I would need to train harder than I had ever trained before in order to prepare myself for my next daunting challenge, the BLDSA Champion of Champions!